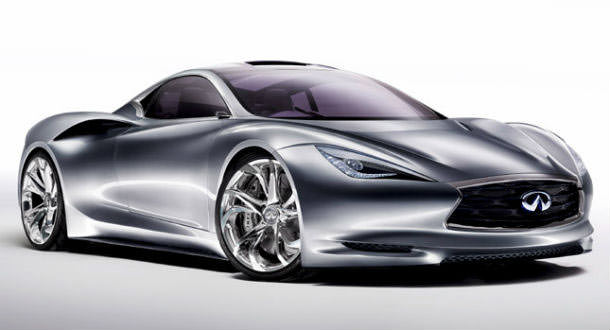 It’s ironic that details have emerged about luxury automaker Infiniti’s Emerg-E concept sports car. The name fits for a concept car that Infiniti has been quiet and guarded about releasing a lot of information on.

However, leaked photos of artist renderings of the Emerge-E recently hit the Internet ahead of its scheduled debut at the 2012 Geneva International Motor Show, which takes place March 8 to 18 in Geneva, Switzerland. The renderings reveal the insides and outsides of a luxurious low-slung two-door, two-seat electric sports car.

The front shows a grill that resembles other new production Infiniti models. The rear spoiler of the sports car is understated. Inside the Emerg-E has a panoramic glass sunroof, tall center console and sporty steering wheel with three spokes.

The Emerg-E will be an extended-range electric sports car, meaning that it will be equipped with a small generator that recharges its battery as it cruises down the road. Also under the hood, the Infiniti Emerge-E is expected to have a version of the same 80-killiowatt engine and lithium-ion battery that parent company Nissan places in its Leaf electric car. When the battery is drained of its juice, the Emerge-E could be equipped with the 1.2-liter Nissan Leaf engine to extend its traveling range.

Executives at Infiniti have said that the Emerge-E represents their vision for a new type of sports car, one that’s a natural next step in pushing the boundaries where performance meets the environment. If the Emerg-E gets a green light for production, it’s highly likely that the sports car will not see Infiniti dealership showrooms until late 2014.