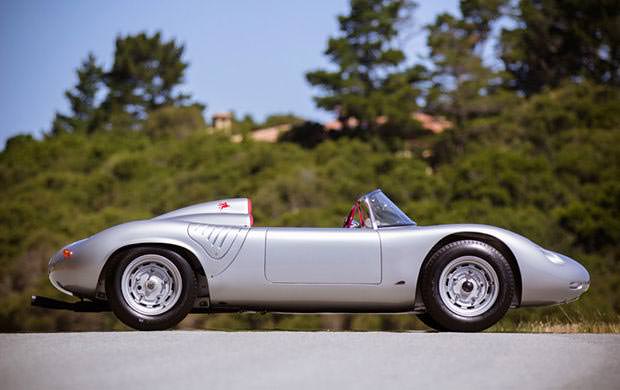 Porsche has always been associated with speed, power, and performance. When the racing industry modified its requirements for auto design, Porsche quickly complied with the 1960 Porsche RS60. The FIA requirements mandated more interior room, a more pronounced windshield, and bigger doors. These requirements resulted in the RS60, which incorporated a longer and wider wheelbase. The expansion of the steel chassis created a heavier vehicle, so to compensate for the added weight, a smaller tire diameter was incorporated.

The RS60 was available in 1.5, 1.6, and 1.7 liter engines which made it adaptable to the Formula Racing. The most common engine type utilized was the 1.5 liter Type 547/3 engine. This was a quad cam engine normally aspirated with 5 speed manual transmission. The Twin Weber 46IDM1 carburetors helped to maximize peak fuel flow for blistering times of the day. The aluminum body sits atop a steel spaceframe with alterations made to minimize excess weight.

The double wishbone suspension was very popular among racing vehicles of the time. The RS60 also featured front and rear magneseum drum brakes. With close to an 87 inch wheel base, this little power house gave everything expected of a Porsche in terms of performance. The top speed reached by this beautiful racing machine is 143 mph, which for the time period was considered to be fast.

Racing and auto enthusiasts can truly appreciate the magnitude of a performance machine with the status of Porsche. The name itself embodies automotive excellence. The Porsche RS60 encountered such success that it was later modified further and offered as the RS61. Though it did not offer much in the way of new or innovative technology to the automobile industry, it is a successful advancement in the world of racing. The 1960 Porsche RS60 provided serious competition to the Ferraris and Mazarattis it competed against.