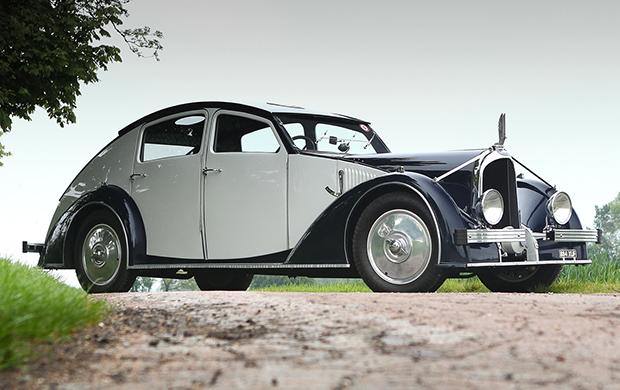 This four door car appears larger from the outside than it does on the inside. It can hold five people, however, it is a pretty tight fit. The car seats are covered with patterned upholstery of woven cloth. The steering wheel is very large and the instrument panel is filled with an array of switches, gauges, dials and buttons.

The back of the Aérodyne is sloped and has a trunk. If more trunk room is needed the rear seats can be folded forward to accommodate for that. On the roof is a sliding panel that can be raised and lowered using a pneumatic motor that’s in the trunk. There is also a crank provided to operate the ‘sunroof’ in the event the pneumatic motor stops working. An interesting feature on the roof of the car are four portholes that allowed light to come into the vehicle.

Under the hood of the 1935 Avions Voisin C25 Aérodyne is a 3-liter inline, 6-cylinder engine that puts out about 90 horsepower and the 4-wheel drum brakes are vacuum-assisted. The car has a maximum speed of approximately 85 miles per hour. 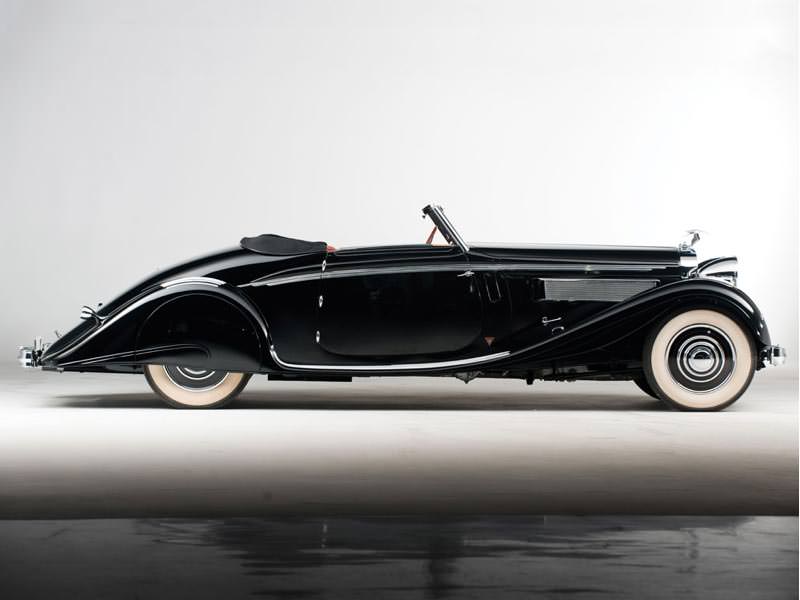 The 1935-36 Auburn Supercharged Cabriolet is arguably one of the most desirable and drivable cars of the Classic Era. The redesign accomplished by Gordon Buehrig were the hit of the 1935 Auto Salons. Their Art Deco styling and streamlined appearance give the cars an unmatched among their peers. The art deco styling was imagined by Gordon Buehrig an was the talk of the Auto Salons in the mid 1930’s.  These cars have it all-a fully synchronized gearbox- dual ratio rear end-Powerful supercharged straight 8 Lycoming engine- 3 position top- outside exhaust, and of course drop dead styling by the legendary Gordon Buehrig. Actually the cabriolet is rarer than the Speedster- only 40 or so were built and around 25 are known to have survived, these cars are the next best thing to a Speedster and you can actually take along some passengers and some luggage. Auburns are bulletproof mechanically, and drive like a modern car. You will have no problem on interstate highways- you can drive 70 MPH all day long.