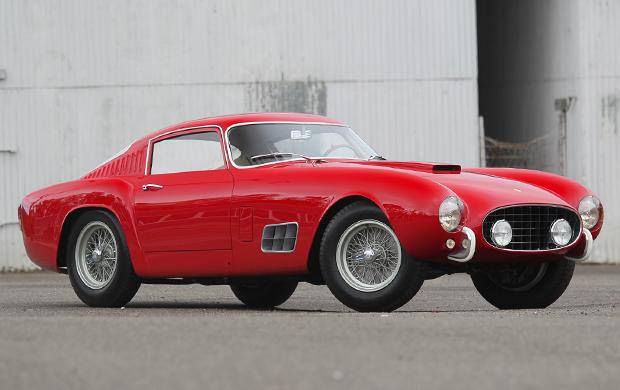 The 1957 Ferrari 250 GT was crafted to excel in the new safer Gran Turismo racing classification born in response to the tragic 1955 accident at the 24 Hours of Le Mans, and excel the Berlinetta did. With First Overall finishes at the demanding Tour de France races of 1956, 1957, 1958, and 1959, the 250 GT Berlinetta would unofficially become know at Ferrari as the “Tour de France” or “TdF” model. While Ferrari’s progressive development style and their penchant for hand crafted bodies guaranteed no two Berlinettas would be identical, the styling of these nine 1957 250 GT Berlinettas is distinctive and very sought after by automobile collectors and Ferrari enthusiasts worldwide The 1957 GT Berlinettas were designed with lowered front ends, sharply defined and nearly finned rear fenders, and a flatter, less wrapped rear window than previous Ferrari models. A prominent cold air induction scoop opens up a large portion of the 1957 Berlinetta’s long low hood, but its most defining elements are the fourteen louvres that sweep down the rear sail panels from roof line to rear fenders. Later editions of the GT would reduce the louvres to three, then one or none, making the 1957 a visual standout in the Ferrari pantheon.