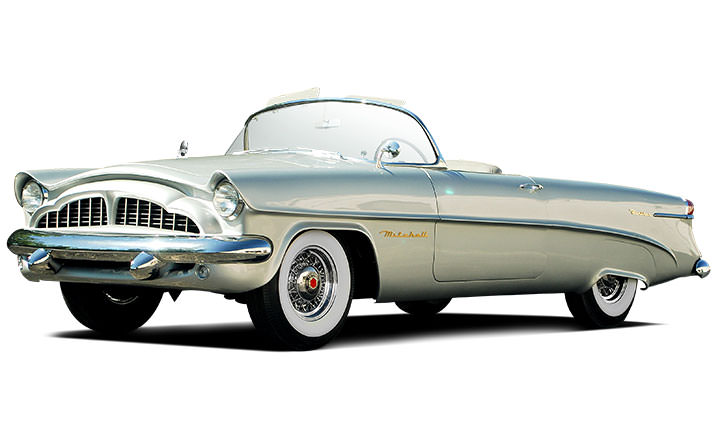 The 1954 Packard Mitchell Panther Supercharged Concept Car is a piece of exquisite machinery. The refined elegance portrays the look of style and grace. Any auto enthusiast would be pleased to have this rare beauty as a part of their collection. In all there are only four Panthers that were built. The first two productions were built as show cars. The next two were designed with one as a hard top, and the other a convertible.

The Panther was an all fiberglass body that featured a 122″ wheel base. The Packard Ultramatic transmission. The Ultramatic was a marvelous piece of machinery perfected by Packard engineers that became overshadowed by competing Hydra-matic self-shifting transmission by Cadillac.

Performance was no stranger to the Panther, even though just a concept car to reinvigorate auto buyers to go with the Packard line. All four cars were fitted with a straight eight 359ci engine. With a power output of 212 HP and 275 HP with the supercharger added in 2 of the vehicles, performance was never a question. Forced draft carburator with the McCulloch superchargers afforded the Panther the kick it needed to put it in the class of the Roadster.

The 1954 Packard Mitchell Panther Supercharged Concept Cars were introduced at a time when sports cars and roadsters were feverishly sought out by everyone who was anyone. It came at a wonderful time, but could not withstand the fierce competition of competitors like Corvette, the Darrin, Thunderbird, or Nash-Healey.

The panther was a stylish sport convertible that took personal luxory seriously to try and be competitive in a hard market. The design of the beauty was similar to other models previously produced by Packard. The taillights were the same as those found on the Clipper, but were replaced later with a cathedral style lighting.

One thing that may have helped lead to the demise of the Panther is that it was being displayed at the same time that Packard was introducing a V8 OHC. This strategic mistake and the popularity of other cars of the time have all led to the 1954 Packard Mitchell Bentley Panther becoming quite the collectors item. Of the four originally crafted, only two are said to still be in existence. Recently at auction a fetching price of $700,000 was sought and met. Not to bad for a car that never progressed past the concept stage.