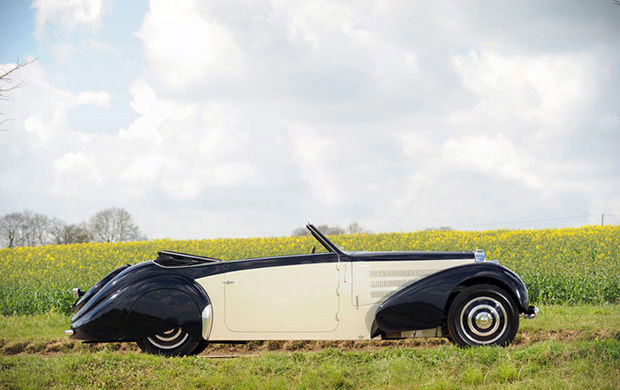 The 1938 Bugatti Type 57C Stelvio is a beautiful automobile that influenced the future design of cars. Its sleek style and signature seam are easily recognized by auto enthusiasts everywhere. It is not just the stylish looks that make this car appreciated, but its innovative engine and construction.

Known for a quieter engine than its counterparts, the Bugatti 57 supplied power to the twin cam engine through gear usage rather than a chain drive. This fine machine could reach a top speed of 112 mph, which for the time was considered one of the faster speeds. Some models featured a supercharger that would enhance performance.

A unique feature of the Bugatti is the distinguished seam running center of its body. This is due to the composition of magnesium or aluminum side moldings that were riveted manually from the outside. The coachwork also featured tear drop shaped fenders and a vertically aligned chrome grill.

Produced as both a racing car and a touring car, the 1938 Bugatti Type 57C was sought after by many. There is said to be just 80 of the Stelvio that were produced. Of those, 17 have yet to be located. This makes the Stelvio a classic piece of automobile history.

Though the Type 57C was a touring car, it did not have much room in the rear seat for additional passengers. One could fit, but not very comfortably. This beauty was really meant for a single driver and passenger. The inline eight engines with twin overhead cam produced performance results that more than made up for a lack of room for backseat passengers.

Some noteworthy owners of the classic Bugatti Type 57C include Ralph Lauren and Jay Leno. Another noteworthy owner was Prince Louis Napoleon of France. His vehicle featured a preselector gearbox by the company Cotal.