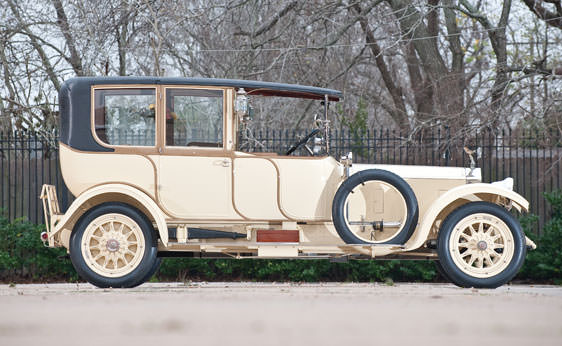 Dubbed “The Best Car in the World” by Autocar magazine in 1907, the Rolls-Royce 40/50 Silver Ghost Landaulette was produced from 1906 to 1926. Originally simply named the “40/50 h.p.” in reference to the car’s taxable to true horsepower output ratio, the Silver Ghost moniker arose from a demonstration car Rolls-Royce put to a test in a 2,000 mile trial under the scrutiny of the Royal Automobile Club as a publicity stunt. The car, recording better than 20 miles per gallon in fuel economy during multiple trips on the roadway between London and Glasgow, carried an all aluminum body outfitted with silver plated trim and fittings and a sliver plated name plate announcing it as the “Silver Ghost” to emphasize its nearly phantasmic quietness. Silver Ghosts became renown for their virtually silent running, their vibration-free operation that resulted in an uncannily smooth ride, and their incredible reliability and durability.

1914 was a turnaround year for Rolls-Royce sales with more than 500 ordered from around the world. The car’s growing popularity in America would eventually lead to a Rolls-Royce factory in Springfield, Massachusetts. By 1914 the Silver Ghost Landaulette had a side-valve six-cylinder 7428 cubic centimeter engine with the cylinders cast in two separate three cylinders sections split by an extremely large center main bearing designed to reduce vibration. Each cylinder carried two spark plugs. A four-speed transmission was used, and the seven bearing crankshaft worked with full pressure lubrication. With a reputation for economy, reliability, durability and a vibration-free quiet ride, by 1914 the Silver Ghost was seen increasingly in the most desirable social circles.